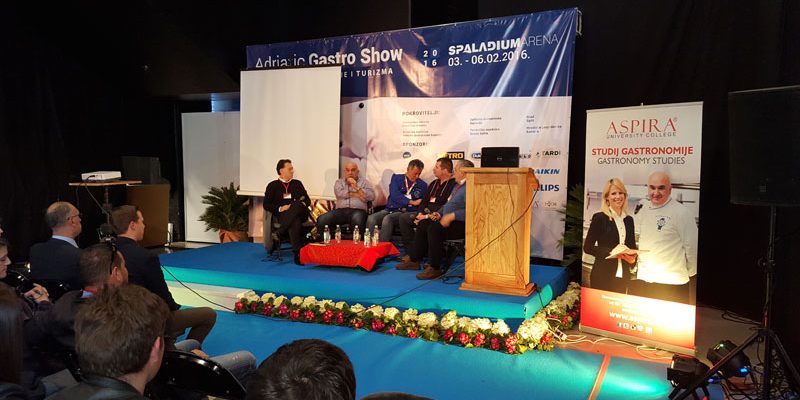 As part of the Adriatic Food Show, the largest fair of gastronomy and tourism was held, which lasted from 3rd until 6th of February 2016, where on the 8,000 square meters in Spaladium Arena, 542 exhibitors from 12 countries represented what they have to offer, which is twice more than a last year when it was first organized. Festival of Gastronomy and Tourism opened its doors to visitors and businessmen who could visit 120 stands on the ground and on the first floor of Arena, with a rich educational content (presentations, panels, round tables and so on). This year’s educational partner of the Adriatic Gastro Show was University College for Management and Design Aspira.

“Gastronomy is something that tourist clientele asks for, and our Dalmatian cuisine is well-known by its gastronomy which should be further developed for the tourism purposes”, said at the opening of the four-day fair mayor of the Split-Dalmatia County Zlatko Ževrnja.

Split mayor Ivo Baldasar stressed the importance of Adriatic Food Show in Split, because, as he said, it brings the city tourism offer to a higher level. The director of the event Stipe Šamija added that the character of the fair is to present the suppliers in tourism business and bring them closer to hotels, restaurants and other catering establishments. Director of the Tourist Board of Split, Alijana Vukšić, emphasized the importance of the fair for the pre-season tourism offer of Split, because numerous guests would visit the city of Split because of it.

After the opening ceremony was held, the best student project was rewarded. It is the project made the University College Aspira students Dora Alfirević, Vice Damjanović, Marin Katić, Maro Roić, Ivan Labetić and Vinko Lelas. “Olive grove – a tradition for the future” is the title of the awarded project, which has been presented in a separate part of the Adriatic Food Show. It was followed by the presentation of the Vice Dean of the University College Aspira Ivana Jadrić on a new Aspira’s Gastronomy study programme. All this was an excellent introduction to a very interesting round table organized by the University College Aspira, about the gastronomy in the development of destinations. Very interesting discussion was led by Iva Puđak Mihajlović (Croatian Tourist Board), Rudolf Štefan (owner and chef at the restaurant Pelegrini, Šibenik), Damir Rogošić (Radman’s mills and Kaštil Slanica), Zlatko Gall and Ivo Bašić (Ministry of tourism) and moderator Ruzica Mikačić.

The second day of the fair was enriched with lectures “How to attract guests with taste to Croatia” by Mr Branko Ognjenović, then “Guest as king” by Mr Tonči Drlje, and finally “Do you believe more to TripAdvisor or Michelin” by Mr Adrian Požarić.

On the third day of the fair a round table entitled “Modern trends in gastronomy” was held and it brought together leading Croatian chefs, such as Branko Ognjenović, Zdravko Perić, Denis Galić, Frane Šerko and Antun Nišević. Top Croatian chefs have concluded that regardless of trends that continuously occur in cooking, what really matters is to stay true to yourself and to authentic ingredients.