Christine Ha – motivational lecture from the winner of American MasterChef 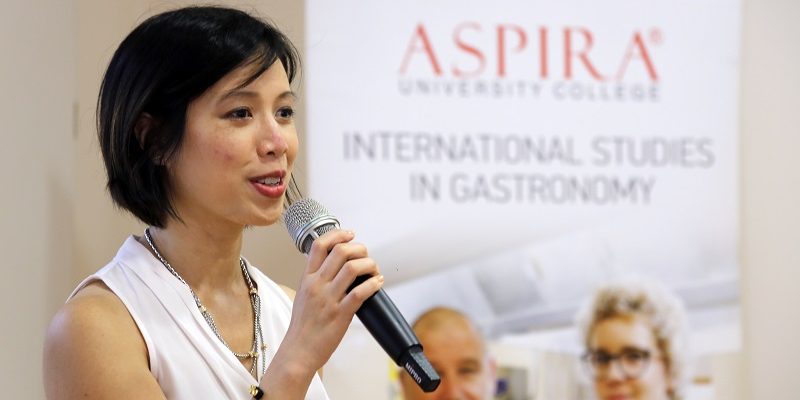 Christine Ha, an extraordinary cook and winner of the American MasterChef is a perfect example of a person who moved their own moved their own limits and proved to herself and others that blind people, with enough will power and work, can conquer all obstacles and be exceptionally successful. Christina’s trip around the world was organized by the American Embassy with the goal of promoting and connecting various cuisines of the world.

“The competition in MasterChef allowed me to show the entire world that blind and visually impaired people can do a lot and I did not want people to feel sorry for me. I am happy I succeeded in that.”

Christine was born in 1979 and she began having problems with her eyesight in her twenties. It all seemed like a passing phase; she would be looking through a thick fog and was hoping her eyesight would “clear up”, but unfortunately, it only got worse as the years went by. After numerous tests, she was diagnosed with an eye nerve disease which was unfortunately not curable, and finally, in 2007, she almost completely lost her sight. The disease at one time spread to the rest of her body and she was completely paralyzed for a few months. With hard work in exercising and great amounts of patience, she succeeded to get back on her feet, more motivated that ever. Christine, for us the embodiment of the power of the human spirit, says that she realized that everything is possible and there is no reason to limit one’s self when she successfully prepared a tasty dinner for her friends who thanks her by eating everything and giving her a big round of applause. For her, that was the sign that only the sky is the limit.

Her husband persuaded her to apply for the MasterChef competition

Christine has a lot of support from her husband who came with her to the lecture in Aspira. Her application for Masterchef happened immediately after her temporary paralysis, and her husband was the one to suggest and persuade her to apply for the show. Christine laughs as she mentions her husband is always her greatest critic and more strict in the kitchen than Chef Ramsey. She emphasized that at the beginning of the show she doubted herself and that the support she received from Gordan Ramsey meant a lot to her. He told her she has to believe in herself and today she is happy she listened to him and did not give up.

MasterChef – a large project with a lot of stress

The recording of MasterChef was very stressful and difficult, but also a very interesting experience. She learned a lot about cooking, but even more about herself. For example, she realized that she needs to trust her instincts and that in cooking, there are no wrong combinations; it is all a matter of taste. Even through Gordan was the strictest person for the other candidates, Christine says that her advantage was precisely that she did not see. She was concentrated on herself and cooking, while other contestants were stressed with the way the judges were looking at them and their facial expressions. Today, when she looks back on her experiences in MasterChef, she says she received a lot more than money and a published cook book. She received valuable experience and a chance to enter a world which she loves in a big way. She loves being with young people, travelling the entire world and the possibility of learning about parts of the world and of course their cuisines.

Master of creative writing and author

Before Christine decided to fully dedicate herself to cooking, she mastered in creative writing. Her victory in MasterChef brought her a chance to publish her own cookbook which she called “Recipes From my Home Kitchen: Asian and American Comfort Food”, which achieved immense success and was a New York Bestseller. She is currently preparing a new cookbook, but also a monograph, which judging on interesting details from the lecture, will also achieve great success.

Cooking is a vision, and food is a way of communicating

She began cooking recreationally before her problems with her eyesight, so that many things she does is by memory. She loves to say that cooking is a vision for her and that it is possible to cook completely on instinct and intuition. For example, she decorates according to memory and chooses ingredients by touch and smell. She finds inspiration in her late mother’s and grandmother’s recipes so food has a sentimental dimension for her as well. She says she also finds inspiration in numerous travels, other parts of the world and that cooking for her is a creative process that begins in her head. She sees food as a way of communicating, and that food is unique because everybody understands it. Food speaks in all the languages of the world.

Motto- try everything twice, travel and always have an open mind

Tasting ingredients is the first step in preparing a dish. Her motto is to try everything twice, because often we do not like an ingredient and it should be given a second chance. Since she travels often, she said the same to all of the students of Aspira; to travel and have an open mind, ready for new challenges and experiences in life. Christine always brings something new from her travels; new experiences that enrich her life and we hope that Croatia and Aspira have given her beautiful memories.

Recipe for success according to Christine Ha: