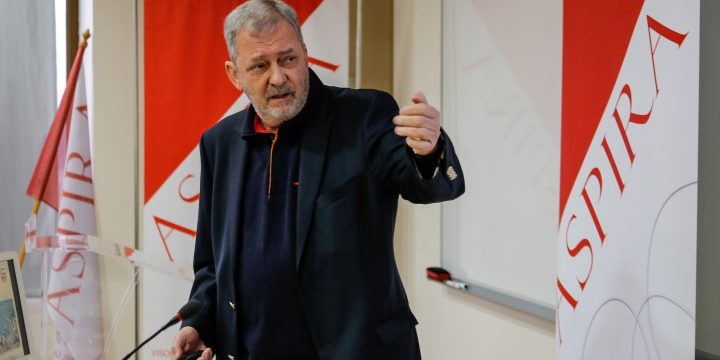 A presentation for the recently published “Storyteller Mobile Tour Guide” by Vedran Matošić was held at the packed auditorium of Aspira University College on December 13, 2017. The event was witnessed by representatives of the Croatian Chamber of Commberce, various tourist boards, as well as many travel industry professionals and Aspira students and staff.

A welcoming address was given by Slobodna Dalmacija (Split daily) reporter Ružica Mikačić who specializes in the travel industry. She briefly outlined Mr Matošić’s eminent career. He headed the Split tourism board for many years during which he also published many books, musical scores, playes and verses for popular songs. Mr Matošić, she argued, is the face of Split tourism, to which he has devoted all of himself.

The author then took the stand and defined his mission with the words “to sugarcoat history and make it romantically appealing, while remaining faithful to the truth.” He then took the audience on a fascinating trip through space and time, across four stories which the book contains: Diocletian’s Palace and medieval Split, ancient Salona, Klis and Trogir. He touched on Saint Dominus, Petar Hektorović, Marko Marulić, reaching at last the monument town of Trogir. The author’s enthusiasm for his subject matter of cultural and historical heritage is hard to convey in words, as are the countless talking points he scatters throughout his exposition. Storytelling is the author’s idea of bringing history to life. According to him, history is “much more than chronology.” Its full meaning is attained only with the engagement of listeners, who identify with the human destinies of characters, whether factual or imaginary. Stories like that remain in the heart forever.

The “Storyteller Mobile Tour Guide” is meant to accompany an English-language mobile application. Professor Mario Buble, the Vice Dean of Aspira University College, recommended the book to “people of Split and everyone passing through Split,” indicating the author’s simple yet layered style as a source of the book’s attraction.

Tomislav Zović, founder of the Klikeri marketing company and Aspira lecturer, described the context in which the book originated and reminded the audience to share their own stories in similar ways.