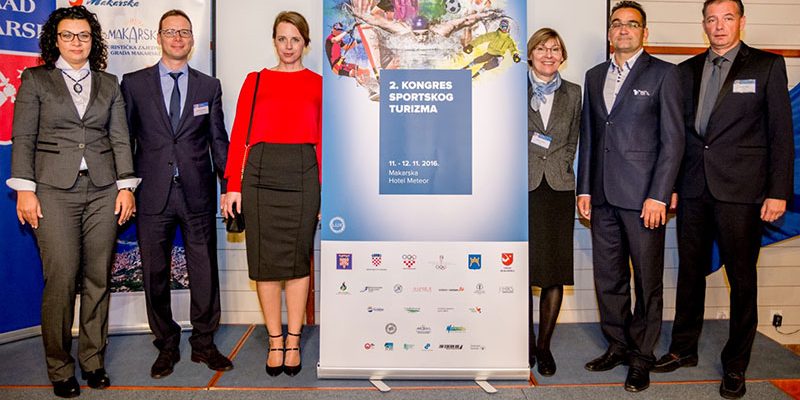 The 2nd Sport Tourism Congress was held from 11 to 12 November 2016 in Makarska, organised by the Lux promocija agency, the Faculty of Kinesiology of Split, the Faculty of Kinesiology of the University of Zagreb, the University College of Sport Management Aspira and the Institute for Tourism. The Congress was organised under the auspices of the President of the Republic of Croatia, Kolinda Grabar Kitarović, as well as numerous other sponsors: the Ministry of Tourism of the Republic of Croatia, the Croatian Olympic Committee, the Croatian Olympians Club, the Split-Dalmatia County, the City of Makarska. The topic of the 2nd Congress was UNUSED POTENTIAL OF CROATIAN TOURISM – SPORT TOURISM.

The Congress was opened by Damir Škaro, PhD, special envoy of the President of the Republic of Croatia. The audience, which included the heads of Dalmatian sport federations and tourism professionals, was greeted by Sandra Čorak, PhD, the vice-president of the Croatian Olympic Committee. The scientific board of the Congress, headed by Prof. Neven Šerić, PhD, was composed of distinguished international reviewers and experts. Prof. Šerić held a speech during the introductory part of the programme. Croatia is one of the leaders in the EU in the field of specialised sport tourism products, which was primarily accomplished thanks to the enthusiasm of individual entrepreneurs and representatives of local tourist boards.

University College Aspira was represented by:

Marko Jelić, PhD, from Knin, presented a vision for the development of a sports centre on the Dinara Mountain and warned that the situation was alarming: the lack of interest from local officials for the development of sport infrastructure, the lack of recognition for Dalmatinska zagora (and Split surrounding areas) in the actual sport tourism offer of Croatia despite its natural resources – the attractions it offers.

The Croatian Olympians Club supported the realisation of the panel Professional athletes after their careers in sport. The topics of this panel were the education of athletes, scholarships, careers in science or coaching, sports legislation. All participants of the panel were top athletes: Blanka Vlašić, who advocated the development of sport tourism by including top athletes, Milivoj Bebić, Željko Jerkov and Josip Reić (moderator), along with the scientific contributions of Olympian Damir Škaro, PhD, Dražen Čular, PhD and Alen Jerkunica, MSc. The conclusion was that Croatian Olympians present a valuable and usable potential for the promotion of the Croatian sport tourism offer. This was emphasised in the introduction to the panel by Damir Škaro, PhD, an Olympian, scientist, entrepreneur, publicist and humanitarian, who pointed out several well-respected names in the world of sports who enriched our society and elevated Croatia’s international reputation by their life’s work. It is therefore necessary to develop a National model for educating sport talents and to encourage changes that would enable the education of top athletes during their careers in sport (dual careers), as it is possible for top athletes in developed countries.

Martina Petrović and Ivana Jadrić presented a paper on the topic of Online marketing of activities of leading sport hotels in Croatia. At the beginning of the presentation, they gave a short review of the historical development of tourism and its growing importance. Tourism is increasingly focusing on individuals and their individual needs. Consequently, special or selective forms of tourism developed, sport tourism being one of them. Sport has fully entered the sphere of the tourism market and has become an important factor in the development of tourism. The paper is actually based on the analysis of the sport-recreational offer in selected hotels and on the activities of online marketing used as a means of reaching the modern consumer. The purpose of the research was to analyse the importance of the development of sport tourism, analyse how rich the offer of sport hotels was in Croatia, analyse online marketing as an exceptionally important communications tool for the tourist market, analyse the activities of online marketing of Croatian sport hotels and, finally, to evaluate them.

Our colleague Marijana Jurišić spoke about the intensive growth of cycling tourism and the increasing number of cycling tourists visiting Croatia, as well the steps that need be taken for further development. The Congress was also attended by Martin Čotar, president of the Croatian Cycling Federation, who commented on the importance of marking roads and cycling tracks and proposed unique solutions for such markings for the entire territory of Croatia to the directors of Tourist Boards attending the Congress. Also mentioned was the need to encourage tourist boards in Dalmatinska zagora to design ways for developing specialised sport tourism products in cooperation with sport federations, most of which are currently being offered by various associations and tourist agencies in an unregulated manner (with no licences for guides and instructors). Expanding on the stated recommendations, it is possible to significantly increase the number daily tourist visits during the main tourist season, as well as to, following the increase in accommodation capacities, encourage year-round visits to Dalmatinska zagora and to geographically similar areas of Croatia.

Srđan Gjurković held a lecture on sports legislation. He stressed that the Treaty of Lisbon introduced provisions on sports in Article 165 of the Treaty on the Functioning of the European Union, by which the EU committed itself to contributing to the promotion of European sports, taking into account the specific nature of sport and its structures while excluding any harmonisation between laws and regulations of member states. The EU may not harmonise sport regulations on a Europe-wide level, simultaneously meaning that national regulations have the advantage.

The main conclusion of the 2nd Sport Tourism Congress is as follows:
Sport tourism needs to be regulated, primarily by the Sports Act. The Sport Department needs to, immediately and without delay, start working on the strategy for developing sport in Croatia, with the inclusion of scientific institutions, competent ministries and the Croatian Olympic Committee, the Croatian Olympians Club, sport experts, presidents of sport federations and interested individuals.