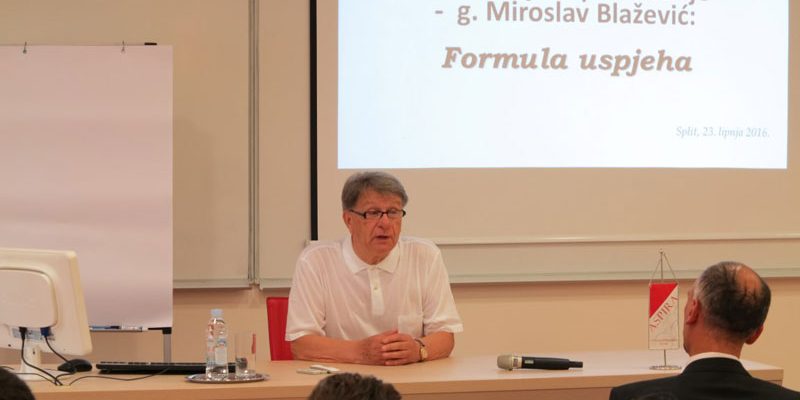 “Never be morally foolish, that will jeopardise your credibility. Be righteous and arm yourselves with knowledge!”

Miroslav Blažević, the coach of coaches and great strategist, held a motivational lecture for students of sport and tourist management at University College Aspira. During the lecture titled “The Formula of Success”, Ćiro reflected on the seven factors necessary for achieving success: talent, motive, character, intelligence, work, surroundings and luck. The lecture was intertwined with stories about real events from Ćiro’s life, which made the students burst out laughing, and even brought a tear to their eyes, several times. Ćiro shared his life’s story, from sweeping the streets in Switzerland, a difficult family situation and poverty to earning the title of “the coach of coaches” who was in charge of five national teams. His life could have been completely different, as his mother wanted him to be a priest, but his stay at the seminary ended by him falling in love in a nun, making even his mother realise that he should be allowed to find his own way in life.

While addressing the students, he emphasised the importance of constantly learning, as a requirement for existence in the world of today, and told them they are privileged to be able to study at an institution such as University College Aspira: “Never delude yourselves that you have learned everything. You should always be learning, because knowledge is the only credible factor of success. Learn so you can be more competitive and earn more money, as even the healthiest person is sick without money.”

He also commented on the Croatian national team, making special note of the young player Marko Pjaca, saying he should be in the starting line-up as he is an extraordinary talent. Furthermore, at first he was not satisfied with the strategy of head coach Ante Čačić, but he “shut him up” with the results he achieved thus far. Ćiro therefore publicly apologised for not having faith in him, adding that it is obvious that Čačić achieved a good understanding with the players. Ćiro definitely sees the Croatian national team making it to the finals of the Euro, as our team that has the highest concentration of top players. Ćiro pointed out increasingly faster playing, agility and compactness as being the new characteristics of this championship, and said that the quality of European football is on the highest level. As the factors behind the success of our footballers, Ćiro points out the surroundings and the genetic heritage of our ancestors, who have been under occupation throughout our entire history and have fought for their independence. That is how they developed imagination and intelligence. Our celebrated coach came down especially hard on Portugal, Croatia’s opponent in the next match, saying how he was never satisfied with their attitude, adding they were not fair and that they have no morals.

He also commented on the reactions of fans who are opposed to the Croatian Football Association, saying that he understood their reactions, because much was taken away from Hajduk and Split, but that he did not condone their means.

The very interesting lecture was loudly applauded by students and teachers, who barely allowed Ćiro to leave after the lecture…